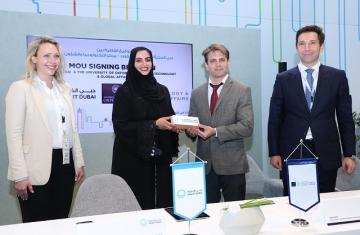 Smart Dubai, the government department which has a mandate to make Dubai the happiest city on the earth through technological innovation, has signed a partnership agreement with the Centre for Technology and Global Affairs at the University of Oxford at the GITEX Technology Week 2018 in Dubai. The agreement signed between the two entities will see them exchanging expertise and experience in the fields of technology such as artificial intelligence, blockchain, big data, IOT, drones, and more.

“Smart Dubai is using the world’s most disruptive and innovative technologies to transform city experiences for Dubai’s resident and visitors. The University of Oxford is the oldest university in the English-speaking world and the world's second-oldest university in continuous operation and its Centre for Technology and Global Affairs harnesses the creative power of the industry’s best minds - we are delighted to be able to partner with such an esteemed academic institution,” said Smart Dubai Office Director General, Her Excellency Dr. Aisha Bint Butti Bin Bishr.

The University of Oxford’s Centre for Technology and Global Affairs is the first global initiative to focus on studying technology in an international relations and political science department at any of the world’s major universities. One of the Centre’s key objectives is to collaborate closely with private companies to gain direct knowledge of Fourth Industrial Revolution technologies and to test its ideas and theories in the here-and-now.

“We believe that Smart Dubai’s unique experience in developing and applying artificial intelligence, big data, and blockchain technologies aligns exceptionally well with the Centre’s activities and research agenda. We believe firmly that both parties will benefit from our close collaboration,” said Artur Kluz, the Centre's founding donor.

“The Centre would gather important inputs from Smart Dubai’s technology and blockchain expertise, while Smart Dubai would gain insights and perspective from the Centre’s unique programs on the impact of breakthrough technologies on international affairs, public policy, and regulations, as well as receive support from the Centre’s world-class team, academic analysis, and industry engagement activities,” added Lucas Kello, Senior Lecturer in International Relations and Centre Director.

The co-operation between Smart Dubai and the Centre will be carried out through the sharing of knowledge through workshops to be organized between the two parties to discuss the development of policies and technological progress. It is hoped that the partnership will put the two organizations on a mutual path to disrupt technology and transform at the city level, with both expressing their commitment to leading the thinking of the next era of politics, government, city and business disruption through digital innovation.