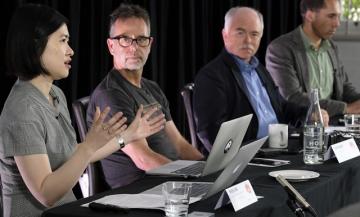 Centre Postdoctoral Research Fellow Dr. Nikita Chiu attended the 5th Quantum Symposium - The Quantum Race: Parallels, Powers & Perils at Q Station in Sydney. Organized by the University of Sydney with support from the Carnegie Corporation of New York, the symposium is part of Project Q - an interdisciplinary inquiry into the peace and security implications brought by the latest advances in quantum science and technologies. The symposium gathers quantum physicists, philosophers, computer scientists, political scientists, and professionals from diverse background to engage in an open dialogue that examines the technical, social, philosophical, and geopolitical aspects of quantum developments.

Along with Ron Deibert from Citizen Lab at the University of Toronto, and Wade Huntley from the US Naval Postgraduate School, Dr. Chiu contributed to the panel on "Parallels: Nukes | Space | Cyber." The panel discussed the possible overlays between nuclear, space, cyber, and quantum technologies. Dr. Chiu asserted that the emergence of the Outer Space Treaty is closely linked to multilateral disarmament efforts in the 60s and 70s, and that different international regimes work in tandem instead of in silos. If the nuclear disarmament regime is in jeopardy, the outer space regime would also face challenges. As such, instead of focusing on salvaging individual regime, Dr. Chiu argued that the international community should work together to strengthen multilateralism collectively in this difficult political context.

Dr. Chiu recognized that the opportunity for a truly global collaborative project in building a general-purpose quantum computer (akin to CERN) has probably been missed, but she remains optimistic that global "patchwork" collaborations in quantum science could still emerge. One example of a global "patchwork" collaborative project is the International Space Station (ISS). The ISS did not emerge as an integrative project where states came together to collectively plan its initial construction. Rather, it is a project that successfully expanded based on establishing compatibility that allows for modules built by different countries to be connected together. Instead of a global quantum race, Dr. Chiu envisions a future when a general-purpose quantum computer is materialized through "patchwork" collaborations. For example, by going "hybrid" and bringing together qubits developed through different methods (i.e. trapped ions, superconducting circuit), and by using error-correction technology developed in one country with qubits developed in another.