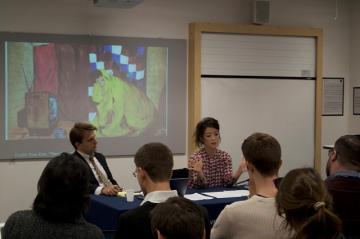 Jieun Baek, PhD Candidate in Public Policy at the University of Oxford, spoke to a full room on ‘Technology, Security, and Regime Survival in North Korea’ at the Centre for Technology and Global Affairs Lunchtime Seminar series this Wednesday, November 8th. Baek was previously a research fellow at the Belfer Center for Science and International Affairs at Harvard University, and served as the North Korea expert for Google Ideas.

After an introduction by Centre Director Lucas Kello, Baek spoke about North Korea’s cyber capabilities, and its vulnerability to outside information. Drawing from her recently published book, North Korea’s Hidden Revolution: How the Information Underground is Transforming a Closed Society (Yale University Press 2016), Baek outlined how outside information and media flows covertly into North Korea, and how this phenomenon creates fault lines in the country’s attempts to seal its information borders.

When Kello opened the floor to discussion questions covered a wide range of topics, from the logistical challenges of citizens obtaining devices to watch foreign media on, to broader themes of North Korean control over their citizens.

In response to a question, Baek explained the ways that the North Korean regime decides who gets to leave the country, as well as the practice of often holding human collateral back in North Korea as insurance against defection. Drawing from her experiences speaking with defectors, Baek was able to provide several anecdotes of both life in North Korea and the activities of defectors in other countries.

At one point, the conversation turned to the role of women in these information networks, particularly as famines have empowered women as additional breadwinners through informal markets. As Baek noted, the interpersonal networks fostered between women in North Korea can be essential in arranging remittances to be transferred from abroad and in organizing larger black market activity.

Throughout, the discussion repeatedly highlighted the implications of these information trends in North Korea. Baek was cautiously optimistic, noting that while outside information would not lead to regime change in the short term, it had already led to some societal change.